5 Exercises for Core and Hip Stability

5 intense exercises for core and hip stability from the lunge and squat positions. Shoulders are also worked to a great degree.

tability training is more intermediate or advanced level work, because in order to do stability training right, you already need to be relatively strong and mobile in the positions you want to develop.

Many people think they are strong but they can't even comfortably hold the lunge position for longer than 10 seconds (in Movement 20XX the goal is to hold the position for 30+ seconds) without starting to shake in a bad fashion. This is because of lack of stability and strength in the hips and knees.

In order to do these drills, you should first master the basic squat and lunge positions with just your bodyweight. It's a misconception to think bodyweight isn't enough when in reality most people would get much better results if they threw away the weights completely.

The purpose of the exercise at hand is to make you stronger, it's not to lift the most weights possible unless you are a competing powerlifter. Too much weight is often a mistake, whereas too little weight is rarely a mistake if you do the exercise correctly.

The change in your center of mass will make it harder to balance and keep everything stable. This stability attribute is the quality you want to develop.

Why should you care about stability? Stability in your hips, knees and shoulders will enhance your athletic performance and keep your joints safe.

3 sets per exercise and 5-10 repetitions per set will work. Ultimately it depends on your individual level and ability. 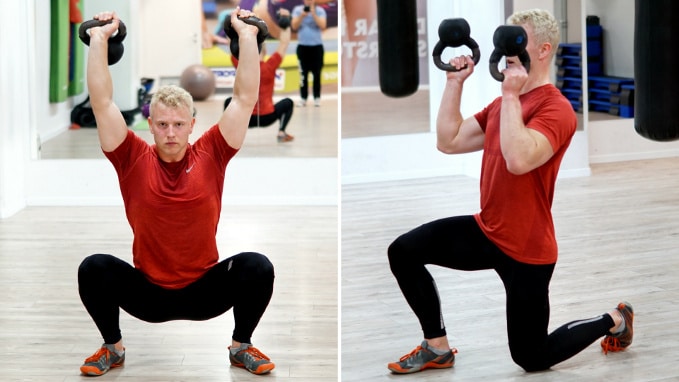 First squat or lunge with light weights on your hands. Once you have a stable position, you can start moving the weights.

Overhead press also known as the sots press (from the squat) will work on your core and hip stability while developing your shoulders.

The hardest variation is to do bottoms up kettlebell press because everything from your forearms and shoulders to the core and hips need to be extremely stable.

You can also work on front and lateral raises. Especially the front raise should demand lots of core stability.

When you do a lateral raise with just one arm at the time, you will develop both hip and core stability very nicely (while also obviously working the shoulder).

You can also do the front push (pallof press) where you move the weight from your chest to straight arms with both of your arms. This is excellent ​for hip and core stability as well.

Just remember to focus on your hip and core stability with mind-muscle connection and merely use the shoulder movements as a catalyst for better stability training!

Test your HIP MOBILITY (Can you do this for 90 seconds?)

WHY and HOW to Strengthen the Hip Flexors

3 Exercises for Knee Stability and Mobility

INTENSE HAMSTRING WORKOUT | At Home or in the Gym

Before traveling over two years and living in big

Could you imagine being confused, uncertain, fearf