WHY and HOW to Strengthen the Hip Flexors - VAHVA Fitness

WHY and HOW to Strengthen the Hip Flexors

Learn the big mistake almost everyone makes in their leg training. It's very RARE to see complete leg training these days - even among seasoned trainees.

he big mistake almost everyone is making: no one is properly training their hip flexors!

You have probably heard about hip flexors before. It's common to hear about tight hip flexors and why you should stretch them to improve your posture and fix hip problems.

The fact of the matter is, even if you stretch your hip flexors you are still badly neglecting them. They are one of the most important areas of your lower body and no one is giving them proper focus if any.

Stretching is only a small fix to the bigger problem. The real problem behind tightness and inflexibility is strength. Pure strength. If your front thighs and hip flexors are tight, it's mostly a result of being weak.

This is why you need to learn how to strengthen the muscles and not just stretch them. Once you start properly strengthening the muscles, you will soon notice that your flexibility has improved by a big margin and the tightness has disappeared.

What are the Hip Flexors? 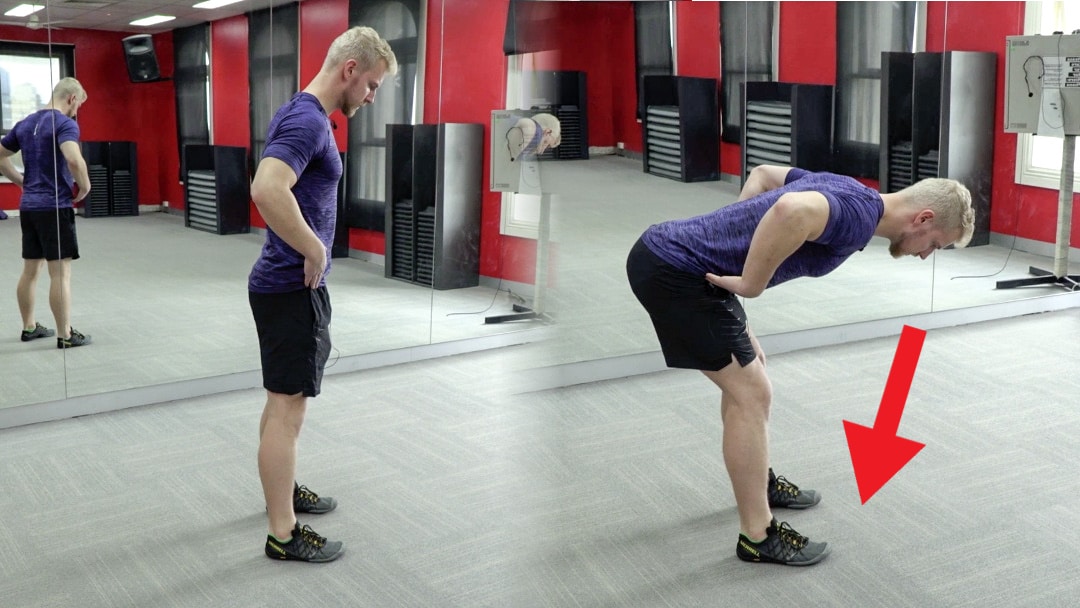 In the hip flexion, your hip angle decreases and your upper body moves closer to the lower body, vice versa, or both.

Hip flexors are the muscles in your legs that flex the hip. Hip flexion happens when you raise a leg or bend forward from your waist. It's a basic function of the human body.

You need hip flexion in your daily life in almost everywhere and in most athletic movements. Hip flexors play a part in:

Basically, training the hip flexors is as important as training the bigger muscle groups of the body like hamstrings and glutes (these are the muscles that extend the hip - the opposite movement!).

If you want to improve your health and well-being in daily life and as a whole - train your hip flexors.

People are too obsessed with their upper body and what they see in the mirror without realizing that what they can't see is linked to what they can see.

If you are standing and walking daily with a bad posture, it directly impacts your upper body posture.

Training the hip flexors (or complete leg training in general) is not only for health. Your posture directly affects your health and this will directly affect your hormonal production and performance in anything you want to focus on.

Athletes train their hip flexors a lot because they know the value of this type of training and how tremendous impact it has on their performance.

If you want to run faster, jump more explosively and kick harder a ball or your opponent - you have to train the hip flexors. In sprinting, jumping and kicking hip flexors are one of the main sources of power. 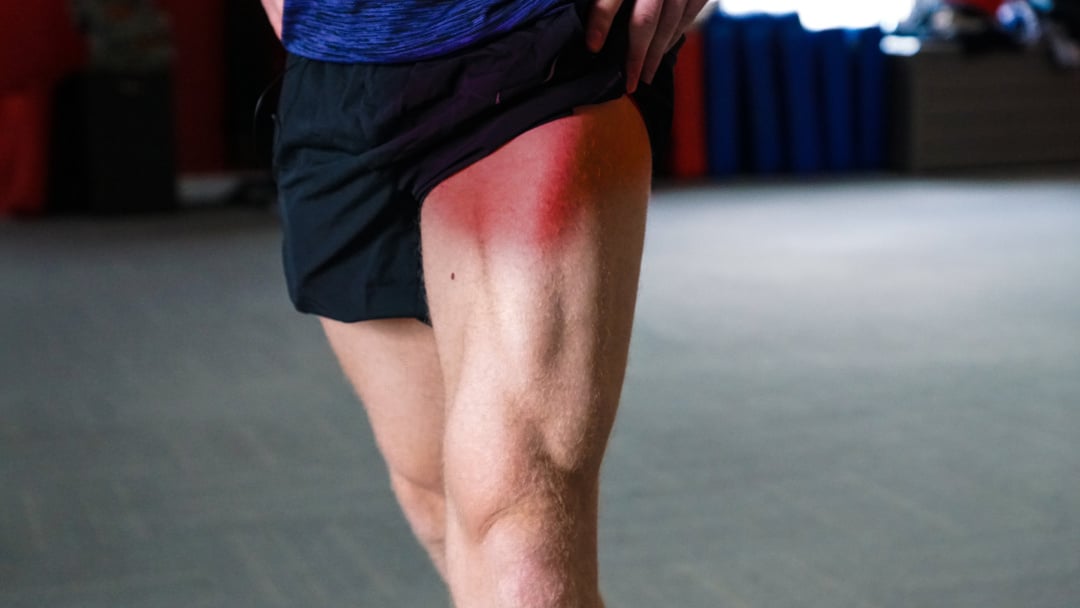 You should feel the hip flexor exercises in this red area and beneath the upper shorts.

Moreover, there is no 1 exercise to fully stimulate the hip flexors. You need a set of different exercises that you should rotate in your workouts.

Most people train their hip flexors when they do sit ups and hanging leg raises - these work the hip flexors but the emphasis is always mediocre at best. Hip flexors, like any other muscle, simply deserve the full focus to fully develop them.

Legs are far more complex than most people think and they require the same amount of focus as your upper body.

The reason there are many different muscles is because all of them work in a slightly different fashion. The muscles also aid in many other functions such as extending the knee (rectus femoris), hip rotation (TFL) and opening and closing the hip (hip abduction and hip adduction).

As a result, training the hip flexion won't merely improve your ability to flex the hip but it will also aid in your overall lower body performance and structural health.

Below we have demonstrated one outstanding exercise to train the basic hip flexion. 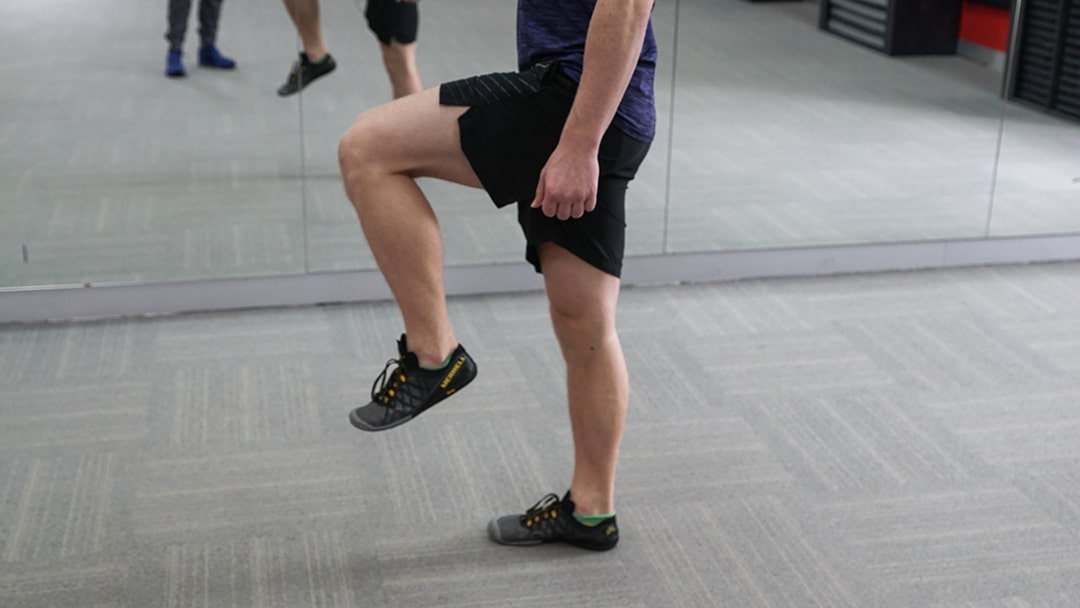 One of the most convenient ways to train the hip flexors is raising the leg while you are standing up!

This exercise is called standing knee raise and it's one of the many exercises of Athlete 20XX system. In addition to hip flexor mobility, we also work on hip flexor stability and power in Athlete 20XX.

You do the standing knee raise by raising the leg (which is the hip flexion) as high as you can without bending the core or using momentum. Don't think the trajectory as pure up and down - instead imagine the knee traveling in a circular trajectory.

The exercise may seem easy but the effects are excellent and not many has good pure movement in this one. We have done this exercise for years and continue to do it on a frequent basis.

The more you do it, the more pure and powerful the motion will become. Focus on high reps and perfect form to really feel the muscles burn and contract. The common mistake is to bend from the core - work hard to eliminate this.

A straight leg raise is an advanced form of the knee raise that will emphasize different parts of the hip flexors and also work the quadriceps stability.

If your leg feels very tight (common), it just means that your hip flexors and quadriceps are weak at this muscle length.

We call this type of muscle strengthening active tension in Movement 20XX. Active tension trains the muscles (in this case the quadriceps) in their shortened lengths in the joints end-range of motion.

Although the straight leg raise seems similar to the knee raise, it's very different in many ways.

Even the hip flexor activity starts to vary when the knee is extended because the role of the rectus femoris is diminished due to the active insufficiency (this increases the activation of other hip flexors).

This is an area a lot of people should focus on. If you want to do an L-sit, get good at yoga or kick very high with the front kick, then this exercise is beneficial for you.

Why are People Neglecting this Area?

It's just not as sexy as doing squats or deadlifts (which both work the opposite function hip extension by the way). They are both great exercises but not sufficient.

Training the hip flexors is not good for the ego because you cannot get immediate gratification as you would from lifting a heavy weight.

There doesn't exist a heavy lift for hip flexion. No one is going to be impressed by how well you flex your hip but they will be impressed when they see your improved posture, how well and fast you can move now and how explosive you have become.

"You are just lifting a leg - that's easy because there is no weight!". A lot of people think that the weight makes the exercise effective when in reality it is the resistance that you generate, not the weight, that makes any exercise work.

You don't need ankle weights for the exercises demonstrated above. The resistance can be created with many other ways than by just adding weight. Stabilization and precision are one of the best ways to do this.

This is why hip flexion training is actually a higher level training in general. To properly train them, not only your form needs to be good but you also need to have a deeper understanding of your body and how to do the exercises.

How most people understand leg training is merely in the form of squats, deadlifts and other simplified exercises. This creates 2D development, not 3D development what the real world actually demands from our bodies.

For many it's ego but for most people it's just lack of knowledge. It is hard to find good information these days.

That's why we are here to educate and take your training to a higher level where you actually feel more confident in your movement and ability to move. Appearance will follow function and that's how an athletic physique is built.

I hope you liked the video and article. This article and video should have lots of useful information you can take into your training but it's still only a small glimpse of what Athlete 20XX could do for you.

Training the legs may seem complicated at first but we have done our best to make it as simple and as beginner friendly as possible.